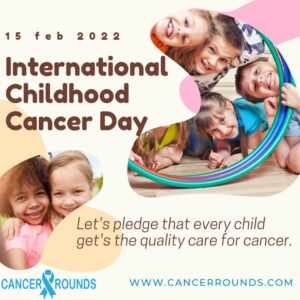 15th of February is International Childhood Cancer Day. It is celebrated globally to raise awareness about childhood cancer, express gratitude and support for children, cancer survivors and families. Every year, more than 4 lakh children and adolescents under the age of 20 are diagnosed with cancer. In India, around 50,000 children are diagnosed with cancer each year, or one child every 11 minutes. Early detection and specialized, precise treatment is an indispensable solution to fighting this disease.

Cancer Rounds celebrates this day to show immense support, compassion and offer help to children and their families suffering from this dreaded disease.

Symptoms: Some generalized symptoms of cancer in children include unusual swelling, pallor in the child (pale appearance), loss of appetite, loss of weight, etc. Early detection of the cancer is the key to preventing cancer from worsening.

Following are the most common cancers seen in children.

Cancer Rounds strikes to bring you the best cancer treatment from the best cancer hospital in Gurgaon and across India, help you connect with the best oncologist and provide a hassle-free experience. Let us all join hands and help the little hearts to fight cancer. 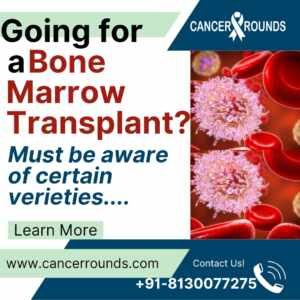 Bone marrow treatment in India is an attraction for the bulk of medical tourists due to experts and experienced eminent Oncologists in India.

The Cancer Rounds is also helping individuals seeking bone marrow treatment in India that are also from nations and different regions worldwide.

This procedure of bone marrow transplant involves transplanting blood stem cells, which travel to the bone marrow where they produce new blood cells and promote the growth of new marrow cells that are healthy.

What is bone marrow?

Bone marrow is the spongy, fatty tissue inside human bones. It creates important parts of the blood- for instance, red blood cells, which carry oxygen and nutrients throughout the body, white blood cells, which fight infection, and platelets, which are responsible for the formation of clots.

These stem cells are unspecialized, meaning they have the potential to multiply through cell division and either remain stem cells or differentiate and mature into many different kinds of blood cells. The HSC found in the bone marrow will make new blood cells throughout a lifespan of an individual.

The Procedure of Bone Marrow Transplant

the target is to replace your damaged stem cells with healthy cells. This helps your body make enough white blood cells, platelets, or red blood cells to avoid infections, bleeding disorders, or anaemia. Healthy stem cells can come from a donor, or they can come from the patient’s own body.

In such cases, stem cells can be harvested, or grown, before you start chemotherapy or radiation treatment and genetically engineered in the lab. Those healthy cells are then stored and used in transplantation.

Why Do You Need Bone Marrow Transplant?

The need for Bone marrow transplants, performed when a person’s marrow isn’t healthy enough to function properly is justified.  This could be due to chronic infections, disease, or cancer treatments. Some reasons for a bone marrow transplant include:

As Bone marrow transplants take up to a week and it is advised that the successful arrangements before your first transplant session as directed by your treating doctor are made up to mark. These can include:

During bone marrow treatment, your immune system will be compromised, affecting its ability to fight infections. Therefore, you’ll stay in a special section of the hospital that’s reserved for people receiving bone marrow transplants.

This reduces your risk of being exposed to anything that could cause an infection. Also to boost immunity the diet will be given to you by your treating team. At this stage communicate with your doctor without hesitation.

During this time, you’ll be closely monitored for any complications or any side effects – so you can get a solution for the issue you meet the solution.

Current innovations in bone marrow treatment in India are all availed at cancer rounds with partnered best oncologists. 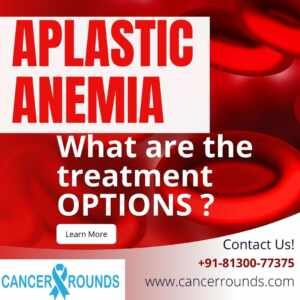 Aplastic anemia occurs when human body stops producing enough new blood cells. The condition leaves the individual fatigued and more prone to infections and uncontrolled bleeding. Aplastic anemia can be short-lived, or it can become chronic. It can be severe and even fatal. It less common and serious condition, which can develop at any age. Aplastic anemia can occur suddenly, or it can come on slowly and worsen over time. Clinically presented as mild or severe.

Aplastic anemia can have no symptoms but if present, signs and symptoms can include:

Blood tests include complete blood cell count – In aplastic anemia all three of these blood cell levels are low.

Bone marrow biopsy is done by a needle to remove a small sample of bone marrow from a large bone in your body, such as your hipbone. The sample is examined under a microscope to rule out other blood-related diseases. In aplastic anemia, bone marrow contains fewer blood cells than normal.

Treatment provided for aplastic anemia by Top hematologists in Gurgaon is dependent on the severity of condition and demographic details like age.

The treatment options include: observation, blood transfusions, medications, or bone marrow transplantation. Severe aplastic anemia, in which your blood cell counts are extremely low, is life-threatening and requires immediate hospitalization.

Immunosuppressants is preferred in cases who can’t undergo a bone marrow transplant or for those whose aplastic anemia is due to an autoimmune disorder. In this the treatment can involve drugs that alter or suppress the immune system (immunosuppressants). Drugs such as cyclosporine (Gengraf, Neoral, Sandimmune) and anti-thymocyte globulin suppress the activity of immune cells that are damaging bone marrow. This helps bone marrow recover and generate new blood cells. Corticosteroids, such as methylprednisolone (Medrol, Solu-Medrol), are often used with these drugs.

Antibiotics, antivirals are administered in cases of aplastic anemia. Because the condition has weakens]ed your immune system, which leaves you more prone to infections. 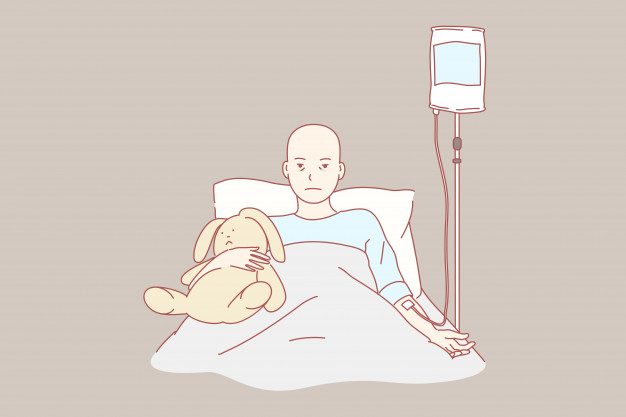 Amid the Global Pandemic COVID-19, the American Society of Clinical Oncology (ASCO) proposed that there is no direct evidence to support withholding immunotherapy or chemotherapy in cancer patients. Therefore, postponing immunosuppressive or chemotherapy is not recommended. Oncologists at Cancer Rounds have years of experience in this field and make treatment decisions following the guidelines by ASCO. Cancer Treatment During Covid-19 will be based on each patient, and factors like the type of cancer, cancer stage, and the risk of cancer recurrence.

Talking about the same, cancer patients are at a greater risk of getting affected by COVID-19 as their immune system is less resistant to the Coronavirus. This has put both oncologists and patients in a difficult situation. Chemotherapy medications, however, destroy healthy white blood cells that protect against viruses such as coronavirus, so halting chemotherapy will place patients with cancer at a much greater risk of tumour growth and may lessen their survival.

Postponing cancer treatment to avoid a potential infection with COVID-19 can be fatal in many patients. Therefore, patients on chemotherapy, should call their Oncologist and talk to him/her before postponing treatment by himself.

Since all health care providers adjust their activities to address COVID-19, doctors who treat cancer patients may also need to change when and how cancer therapy and follow-up visits can be conducted. Oncologists at CancerRounds will weigh the risk of failing a cancer treatment, the side effects of chemotherapy to cancer patients exposed to COVID-19, and find a workable treatment plan taking into consideration all the precautions and guidelines given by the Government.

For other patients, unless they are exposed/showing symptoms of COVID-19 or tested positive, they should continue with Chemotherapy and Radiation Therapy.

Cancer patients knowing to have a compromised immune system should take a few extra steps and precautions to lower their exposure to the coronavirus. Staying at home, using hand sanitizer and gloves, following social distancing guidelines, and following rigorous hygiene is vital for cancer patients to protect themselves from getting infected by COVID-19. It may be acceptable to postpone routine or some avoidable follow-up visits of cancer patients, but should constantly be in touch with the Oncologist on the telephone and do the needful when required. For more such information, visit Cancer Rounds’ website.