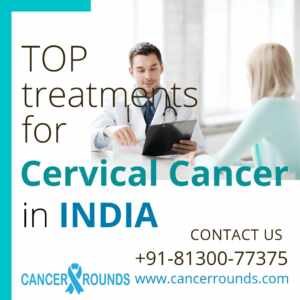 There are several methods to treat cervical cancer in India, which include surgery, chemotherapy, radiation therapy and immunotherapy. The type of treatment that should be used depends upon various factors such as the size of the tumour, the physical condition of the patient, the location of the tumour and the availability of the treatment method. The types of commonly used methods to treat cervical cancer are given below:

Surgery is one of the commonly used procedures for treating cervical cancer (of course, with respect to the stage of cancer). A gynecologic oncologist is a doctor who specialises in using surgery to treat cancer in the female reproductive system.

During surgery, the tumour and some of the surrounding healthy tissue are removed. The following techniques are frequently performed for cervical cancer that has not progressed beyond the cervix:

Radiation Therapy is another popularly used treatment option. It is done as one, external radiation therapy and two, brachytherapy which means the insertion of radioactive sources near the tumour for time intervals. If the female desires to conceive, freezing the eggs is a popular option practised.

Low doses of chemicals that can kill cancer cells are injected. Chemotherapy and radiation therapy work as adjuvants. A combination treatment is practised for advanced stages of cancer.

Immunotherapy is a cancer treatment that stimulates the body’s natural defence mechanisms. It is also known as biological therapy. It helps in restoring the body’s immune system and improves functions by using the body’s own immune system simultaneously with those prepared in the laboratory.

How to get Treatment for Cervical Cancer?

Just like other types of cancers, cervical cancer is a treatable one. Cancer Rounds provides personal care from the day of consultation throughout the treatment.

Our constant efforts are focused to create awareness and help as many females suffering from cervical cancer as possible. Break the barriers and talk them out with our doctors.

To know more about the treatment of cervical cancer. You can connect us at our customer care number or visit www.cancerrounds.com