What is Bone Cancer?

As the name suggests, bone cancer affects the bone cells. It can begin in any body bone when the bone cells lose their ability to control division and grow uncontrollably. 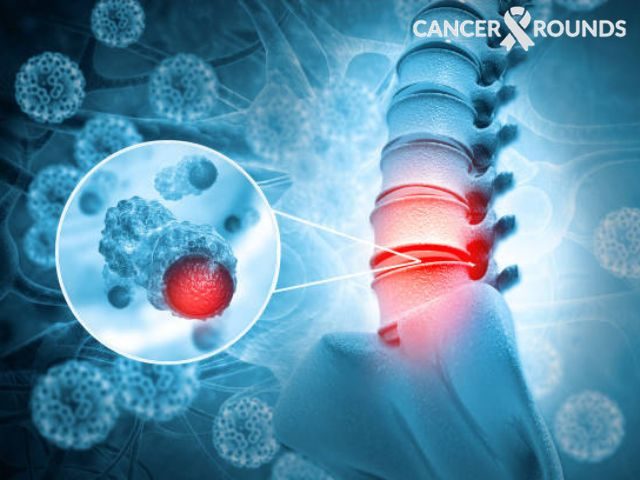 The uncontrolled growth of cells is known as a tumour which could be benign or malignant.

The main difference between benign and malignant bone cancer is given below:

Bone cancer can begin in any bone but most commonly it starts from the pelvis or long bones including arms and legs.

Bone cancer is rare, and it can occur in people of any age group, but teens are the most prevalent bone cancer.

Based on origin, bone cancer has been classified into two main types, namely – Primary and secondary.

Primary bone cancer is the rarest and most dangerous and forms directly in the bone or the nearby tissues such as cartilage.

Whereas secondary bone cancer starts from other organs and later invades the bones.

Some common primary bone cancers are:

Osteosarcoma is a prevalent bone cancer which generally affects children and young adults. It is the most prevalent type of primary bone cancer, being the cause of 2 of 3 bone cancer cases.

Originating from the tips of long bones such as arms and legs it reaches the other bones also. The commonly affected bones are the hip bones, shoulders and other locations majorly damaging the other layer of bones.

Similarly, Ewing’s Sarcoma affects young children and teenagers. It begins from the soft tissue around the bone or sometimes directly from the bone. It is also prevalent in affecting the long bones and pelvic regions.

Chondrosarcoma is a rare type of cancer which begins mostly in cartilage cells except in a few cases where it starts in soft tissues surrounding a bone. It mostly occurs in the pelvic, hip and shoulder bones.

It’s not cancer but a slow-growing and non-invading tumour. This tumour could be made up of cartilage, bone, or soft tissues.

It usually occurs in the hands and feet and sometimes in the collarbone, pelvis, ribs, spine, or skull.

If you observe more than 2 symptoms in your body, consult a doctor immediately. Early detected bone cancer is more likely to get cured. 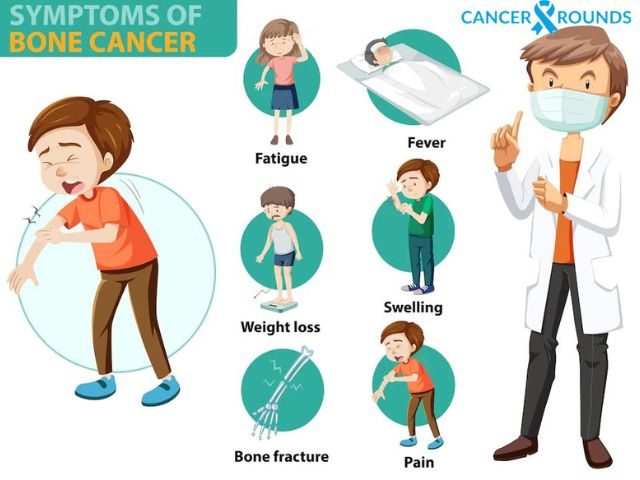 Apart from common symptoms of cancer such as fatigue, weight loss and nausea, there are some main signs and symptoms of bone cancer are:

The most prominent symptom of bone cancer is bone pain which feels like tenderness in the affected area.

This pain may persist for more than a week, during the day and night, which progress with time. Usually, the pain increases at night or when the bone is being constantly used.

Often the weakened part of the bone breaks which leads to sudden unbearable pain.

Swelling and redness in inflammation are also seen in the affected area or around the bone. Inflammation is a conditional symptom of bone cancer.

Typically, swelling does not affect until the bone cancer is around a joint. The tumour around a joint leads to lump formation and hence causes inflammation and movement restriction in the affected area.

Therefore, cancer weakens the bones in the affected area which could easily break.

A visible lump around the bone is usually observed due to the formation of a tumour. Although it is not a common symptom, this is a crucial sign of bone cancer.

Usually, people experience mild pain in an area around the bone and when the bones become weak, fracture leads to severe pain.

Usually, Inflammation in joints makes it more difficult to move the joint and hence causes problems in moving. A tumour that is around a joint grows and restricts the movement of the joint.

This leads to other symptoms of bone cancer such as pain and swelling around the joint.

What are the Causes of Bone Cancer?

Bone cancer is a life-threatening disease which could hinder a person’s life in many ways.

The main cause of bone cancer is still unknown, but researchers have found bridges between several factors and bone cancer.

The potential causes of bone cancer are as follows:

How to diagnose bone cancer?

People usually visit any orthopaedic (bone specialist doctor) or bone cancer specialist when they experience or find any lump or swellings in any bone or surrounding area.

There are separate ways to detect bone cancer in a patient, and most of them are painless as well.

Depending on the symptoms the patient is advised to go under various tests, such as

Usually, the doctors firstly ask the patient to take an x-ray of the affected part, which is a process that creates an image of the bones inside the body.

The X-ray can give an honest answer to the question if you have bone cancer or if it is something else.

It helps to detect damage caused by bone cancer or new bones growing because of bone cancer. It can also suggest if the pain or swelling is due to cancer or any fracture.

The biopsy is the most definitive way to diagnose any type of cancer, where a sample of the tumour is taken to check it under a microscope and examine for defective bone cells.

A bone biopsy can be done in two ways, which are:

Computed tomography or CT scan is a process involving several x-rays taken to generate a 3D image of the body.

It is usually done to check that bone cancer has metastasized to other organs, especially the lungs.

Magnetic resonance imaging is the best way to get a detailed image of bone cancer. It uses strong magnetic fields and radio waves to produce detailed images of bones and soft tissues.

A bone scan is a better version of an x-ray and provides more detailed information about the inside of the bone.

It uses a radioactive material which is injected into the patient’s body, tumour cells absorb the material faster than normal cells and are hence observed as a hotspot.

The commonly used diagnostic method in Ewing’s Sarcoma, Bone marrow biopsy is used to check if the cancer is spread to the bone marrow inside the bones.

It uses a needle to collect the bone marrow sample from a bone when the patient is under the influence of anaesthesia.

The sample is sent to the laboratory and examined there for cancerous cells.

Depending on the symptoms of bone cancer and the result of diagnostic tests, the doctor labels the bone cancer/tumour according to the size of the tumour and how fast it is growing/spreading to other body parts.

This process is known as staging. It assists in determining how much cancer has spread and its severity to access the best cancer treatment.

The most common staging system used is given below:

Staging helps the doctor to determine how much part of the bone is affected and which treatment plan will be most adequate for the specific patient with bone cancer.

Treatment and Conclusion of Bone cancer

The doctor suggests the best treatment. Many patients go under combination method to control the growth of

Bone cancer is a rare disease which can be treated when detected at its initial stages. Approximately 6 out of 10 individuals with bone cancer will survive for at least 5 years following their diagnosis, and many of these individuals may be cured.

With the help of professionals, bone cancer can be treated effectively. Cancer rounds are associated with many cancer specialists who are working in this field for years and have treated many patients.

Send us your query regarding cancer and our team will help you get the best treatment.