What is blood cancer?

Blood cancer is a type of cancer that affects the bone marrow and eventually the production and normal functions of blood cells.

Normally, old blood cells die, and new cells replace them in a period.

But blood cancer affects the bone marrow where these cells are formed.

There are stem cells in the bone marrow which mature and develop into different types of cells.

There are many symptoms of blood cancer which can be determined easily.

We will discuss the types, symptoms, diagnosis and stages of blood cancer in this article.

There are three types of blood cancer that have been categorised on the basis of the type of blood cells which is affected:

These defective cells are not capable of fighting the infectious organisms entering the body.

It could be acute I.e., rapidly growing or chronic I.e., slower growing cells.

It could also affect the lymphatic system or immune cells. It also affects the bone marrow’s ability to produce red blood cells.

There are some common forms of leukaemia, namely:

It is the type of blood cancer that affects, especially the lymph nodes.

The lymphatic system is accountable to eliminate excess fluids in the body or to produce immune cells.

Lymphocytes are a type of white blood cell that fight the infection and lymphoma affects these cells.

Abnormal lymphocytes are produced in this blood cancer and these abnormal cells become lymphoma cells which massively grow in lymph nodes.

There are two common forms of lymphoma, namely:

Plasma cells are a type of white blood cell that produce antibodies to fight disease-causing organisms. Multiple myeloma is a blood cancer that affects these plasma cells and eventually weakens the immune system of the patient. This makes the patient more prone to infections.

Prevalence of types of blood cancer

Different types of blood cancer is being observed differently in the population.

The table below shows how much prevalent a type of blood cancer is: 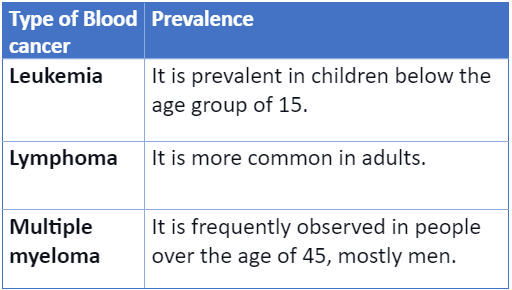 There are several symptoms of blood cancer which can be used to determine the condition early.

Here is the list of some of the common symptoms of blood cancer are:

Frequent coughing and chest pain are the common symptoms of leukaemia which occur due to the buildup of abnormal white blood cells in the spleen.

As the abnormal white blood cells are formed in large numbers but these cells are unable to fight any infectious entity hence regular infection is an ordinary symptom of blood cancer.

Fever is a secondary symptom that is observed as a result of infection. As the immune system of the body is not strong enough to fight those infection-causing organisms, fever and chills occur usually in blood cancer.

Bruising and unexplained bleeding with unreasonable rashes and tiny red dots on the skin are the most common symptoms of blood cancer in females.

Nausea and the feeling of throwing up are common multiple myeloma symptoms. The possible reason behind it could be that the cancerous cells accumulate in the spleen which pushes the stomach.

Feeling tired and weak may occur due to fewer red blood cells or anaemia. This is the most common symptom of blood cancer and can be seen in every type of blood cancer.

Due to the accumulation of cancerous white blood cells in the lymph nodes, it forms lumps which can be felt. They are commonly painless and are often observed as a symptom of blood cancer.

It is a common symptom of lymphoma. The skin gets rashes and becomes itchy. The reason is still unknown.

Most commonly observed symptom of blood cancer is shortness of breath. It is also a secondary symptom that occurs due to anaemia.

This symptom is common in every type of cancer. As the cancerous cells grow rapidly, they take up all energy and food which causes the other normal cells to die. Hence eventually lead to weight loss. 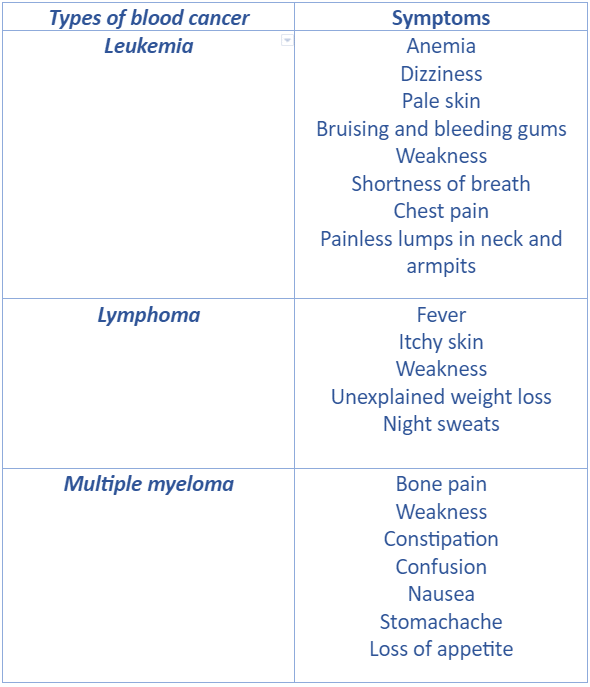 If the doctor suspects that the symptoms could be due to cancer, the medical professional will prescribe a diagnostic test to be sure.

A diagnostic test is a must in case of cancer to get essential information such as the location of the tumour, stage of cancer, affected organs etc. Different types of diagnostic tests are mentioned below complimentary to the type of blood cancer:

Some of the above-referred tests are

Staging is a method to characterise the degree how much the cancer has grown and spread to other organs.

The doctor uses these stages to plan a precise treatment plan for the patient according to their condition. The stages of blood cancer are:

Symptoms of blood cancer are vaguely distant from any other condition, so might get hard to distinguish between them.

Consult your doctor if you observe more than two symptoms persisting for more than a week without any improvement in the condition.